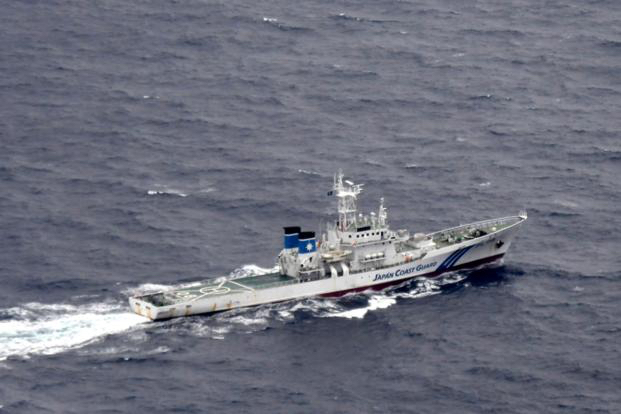 In this aerial photo, a Japanese Coast Guard ship is seen at sea during a search-and-rescue operation for missing crew members of a U.S. Marine refueling plane and fighter jet off Muroto, Kochi prefecture, southwestern Japan, on Dec. 6, 2018. The two planes crashed into the Pacific Ocean off Japan’s southwestern coast after a midair collision. (Kyodo News via AP)

“After an update from the Joint Personnel Recovery Center, and a review of all available information, I have made the determination to end the search and rescue operations for the crew of our [Hercules] … and to declare that these Marine warriors are deceased,” III Expeditionary Force commander Lt. Gen. Eric Smith said in a statement posted Tuesday afternoon local time to the organization’s official Facebook page.

“Every possible effort was made to recover our crew, and I hope the families of these selfless Americans will find comfort in the incredible efforts made by U.S., Japanese, and Australian forces during the search,” he added.

Seven Marines were involved in the training accident, which occurred just before 2 a.m. Thursday local time about 200 miles south of Muroto Cape on Shikoku Island, U.S. and Japanese officials said.

Although the crews were conducting regularly scheduled training, Marine investigators have not confirmed that aerial refueling was underway during the incident, the statement said.

The Hercules’ flight data and cockpit voice recorders have not been found, making it “premature to speculate about wreckage recovery,” the statement added.

Two Marines aboard the Hornet were recovered the day of the accident. The first has been released from a hospital, while the second — Capt. Jahmar Resilard, 28 — was pronounced dead after being found by a Japan Maritime Self-Defense Forces ship.

The statement did not identify the five Marines, but it did say their next-of-kin had been notified.

“All of us in the Sumo family are extremely saddened following the announcement of the conclusion of search-and-rescue operations,” Lt. Col. Mitchell Maury, commander of Marine Aerial Refueler Transport Squadron 152, said in the statement. “We know this difficult decision was made after all resources were exhausted in the vigorous search for our Marines. Our thoughts are heavy, and our prayers are with all family and friends of all five aircrew.”

Smith also expressed his condolences to the lost Marines’ families.

“Every member of the III MEF family mourns this loss and stands alongside the families of the fallen in this terrible moment,” he said in the statement. “We remain, Semper Fidelis.”

Both the Japan Self-Defense Forces and Japan Coast Guard announced Tuesday that they’d halted their search efforts at 6 a.m.

While the coast guard has stopped searching specifically for the crew members, it will keep an eye out during regular patrols of the area, a spokesman for 5th Regional Coast Guard Headquarters told Stars and Stripes on Tuesday via telephone.

The coast guard sent six of its patrol boats on Thursday and continued to send vessels until Monday, although its search team had shrunk during that time, the spokesman said.

A multinational effort to find survivors was launched that included U.S., Japanese and Australian aircraft and U.S. and Japanese ships.

III MEF has declared the incident a “Class A” mishap, Japan’s Kyodo news agency reported Monday. Those involve total property damage of “$2 million or more and/or aircraft destroyed” and “fatality or permanent disability.”

Marine officials said Tuesday they are still investigating the incident.

MCAS Iwakuni is home to Marine Aircraft Group 12 and the Navy‘s Carrier Air Wing 5. It is one of the Pacific’s largest air stations.

Center For Autism And Developmental Disabilities at Touro University Cuts The...