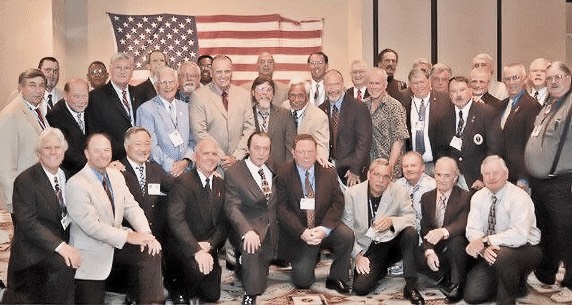 By: Terry Lee Parker
Among the many veterans organizations that choose to have their annual reunion in Las Vegas; Casper Aviation Platoon is one of the most unique in recent history.
“Casper Aviation Platoon was the only separate aviation platoon in the United States Army during the Vietnam War.  Casper was organized with the HHC 173d Airborne Brigade, on Okinawa in 1963 and arrived in country on May 5, 1965 becoming the first United States Army ground unit committed to the Vietnam War. Casper Platoon supported the Brigade until they all left Vietnam in August 1971.” http://www.casperplatoon.com/
Casper flew almost every type of heliborne mission there was including resupply, visual reconnaissance, Snoopy, Nighthawk, dust off, command & control and combat assault missions.
The 2019 reunion will be held at the Tropicana Las Vegas on April 23 -25, 2019. “Las Vegas has been one of the most favorite spots for our reunions over the last 18 years”.
Ron Thomas, a local resident of Las Vegas served with the 173rd Airborne Brigade in Vietnam and said, “We could always count on Casper to deliver supplies to us while on patrols. They could supply us with equipment, rations, ammunition, and occasionally a hot meal. I will never forget the sound of an approaching helicopter! Whop! Whop! Whop! There were also times when they picked us up during a fire fight. Those two extra machine guns came in handy too”
Members of the platoon come from every area of the country including New England, Florida, Texas and the Northwest. The first reunion since the Vietnam War ended, came in 2002 when the platoon met during the reunion of the Vietnam Helicopter Pilots Association held at the Riviera Hotel & Casino.
Compared to other military unit reunions which might number up to 1000 members, Because Casper Aviation was only platoon sized, their attendance usually numbers around 50, but with family, friends and Gold Star members the numbers can often reach over 100. This smaller number of members means we are a close nit group. Over the last few years we have really grown into a family group. Unfortunately, the older we get the fewer there are of us. It seems like we get word every month that another member has died. It’s very sad!
The 173rd Airborne Brigade Combat Team (Sky Soldiers) is currently the U.S. Army’s Contingency Response Force in Europe. Headquartered in Vicenza, Italy, the Brigade no longer employs an aviation platoon.