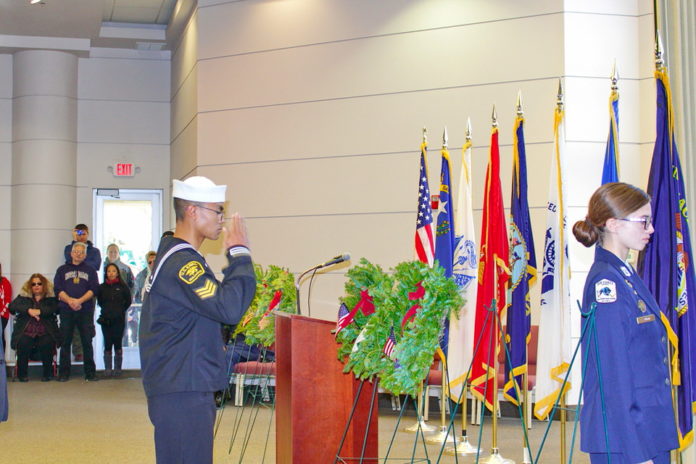 By VRN Staff | Photos by Su Phelps
The Wreaths Across America ceremony was initiated at Arlington Cemetery 15 years ago to recognize our veterans from the Revolutionary War to present day patriots. It is held during the time of year when their loss is most apparent by the empty seats at the holiday table.
This year hundreds of volunteers attended memorial services and assisted with wreath laying duties at the Southern Nevada Veterans Memorial Cemetery in Boulder City. The event sponsored by the Civil Air Patrol and hosted by the Nevada Department of Veterans Services was held on December 14th, 2019. The ceremonies included participants from Veterans organizations, active military, cadet organizations, family members and individuals. The services included the placement of a wreath for each branch of the service; Army, Navy, Air Force, Marines, Coast Guard, Merchant Marines and POWs while the Palo Verde JROTC sang the marching songs of each branch.
Attending dignitaries include Representative of Congresswoman Dina Titus Alanna Simpson, Congresswomen Susie Lee, Representative of Senator Jacky Rosen, Brendan Vargas, Director of NDVS Kat Miller and Deputy Director of NDVS Fed Wager.
Several organizations volunteered time to organize the ceremony including; American Legion, Civil Air Patrol Squadrons, Scottish American Military Soc., Vietnam Veterans of America, Military Order of the Purple Heart, National Order of Trench Rats, Disabled American Veterans, Veterans of Foreign Wars, UNLV Veteran Office, and Women Veterans of Nevada.
Various organizations participated for the Ceremonial Wreath Program including; Disabled American Veterans, Catholic War Veterans, Nevada Gold Star Families, Greater Nevada Marine Corps Veterans League, American Legion, Veteran of Foreign Wars, American Merchant Marines, Civil Air Patrol, Air Force JROTC, NAVY JROTC & Sea Cadets, Marine Corps JROTC, and active military from all branches.
Major James Grindstaff of the Civil Air Patrol welcomed the participants and provided background on the Southern Nevada ceremony. He explained the event began in 2017 with the first donations of 6,201 wreaths. In 2018, that number rose to 6,330 and the organizers vowed to increase that number to 10,000. “It was a huge job. I know it was a lot.” He then proudly told the crowd that 9,702 wreaths had been delivered for the ceremony, and added that, “The good news was that counting wreaths which were ordered and not yet delivered … the total to 11,500.”
He thanked all the donors; individuals and families; local community groups including the Raiders who donated 1,000 wreaths; and the more than 58 Veterans organizations, for “… the most successful year to date.”
Grindstaff, filling in for Colonel Carol Lynn of the Civil Air Patrol, also presented opening remarks. He explained that the WAA was not only held in the U.S. but in, “some of the cemeteries in Europe to recognize those who gave their last full measure all over the world.” He noted that there are 29,000 Veterans interred at SNVMC and by next year it is anticipated there will be 30,000. He added his hope that they would be able to have wreaths for all 30,000 graves, matching the Jacksonville cemetery which was the first to have wreaths for every grave.
The Speaker of the Day was Colonel James Price, Vice Commander of the 432nd Wing and 432nd Air Expeditionary Wing at Creech AFB, Nevada. He is responsible for the operation and maintenance of the Air Forces remotely piloted aircraft wing. During the ceremony he noted that airmen at Creech were flying combat missions as they were holding their ceremony highlighting that the call to service never ended. He recognized Blue Star families whose children are also presently serving, thanked Gold Star Families and the Society of Military Widows of Chapter 34 for their sacrifices. He also thanked the active military and retired veterans who were present.
Price pointed out that the SNVMC is a relatively young facility having opened in April 1990. It is the second busiest veterans cemetery in the U.S. having held 2,096 burials in 2018. He also pointed out that while most of us think veterans cemeteries are filled with combat victims, the SNVMC has only 19 veterans who were KIA, the remainder served their country both in the service and then by participating in their communities. The chapel ceremony was closed then by the playing of “Taps” by trumpeter Pat Baucher of Bugles Across America.
Wreath clean-up will take place on Saturday, January 25th at 7a.m. Volunteers to assist in clean-up are welcome! To see more photos or more stories, go to https://www.veteransreporternews.com/ 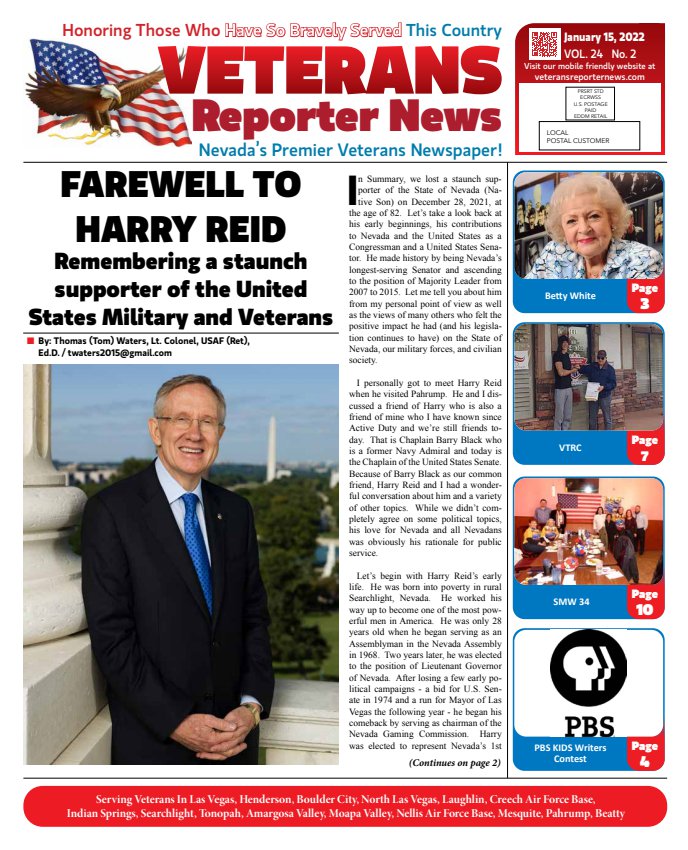 Monthly Veterans Luncheon at The Bridge at Paradise Valley