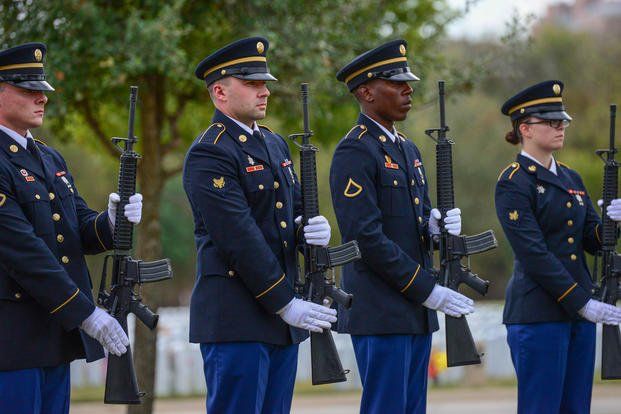 The Associated Press | By Daniel A Flores

MISSION, Texas — Carlos Jaime Torres’s family recently gathered under a tree to watch him lowered to his final resting spot at the Rio Grande Valley State Veterans Cemetery in Mission.

The Monitor reports the late veteran received a hero’s welcome back to the country that twice deported him, complete with full military funeral honors — a 21-gun salute, taps, and presenting of the flag to the next of kin.

Torres died this month in Reynosa, Mexico, at 64.

“It means a lot, actually,” Torres’s 33-year-old son Sam Mosqueda said of the ceremony performed by the Fort Sam Houston Honor Guard. “That’s what he deserves. It’s the bare minimum, since he was not allowed re-entry into this nation.”

Torres was brought to the United States as a small child and was raised in California.

“While other people were draft dodging, he actually volunteered,” Sam said. “He wanted to go to Vietnam. That was just the type of person he was.”

Torres was honorably discharged in 1976 after serving four years. In 1994, he was convicted of possession of marijuana and served four years before his deportation to Mexico.

“He believed he was an American citizen until the time he was deported,” Sam said.

Torres returned to the United States illegally and lived in Mission. He would be deported a second time in 2010, subsequently working in Reynosa as a security guard.

U.S. Rep. Vicente Gonzalez, D-McAllen, has made it a priority to address the issue of veteran deportations.

Torres’ sons said their father instilled a sense of service in them. Four of his five sons served in the military.

“Growing up, he would say, ‘You’re an American. Be proud of it,'” his 36-year-old son Carlos Edward Mosqueda said.

His children said Torres always embodied an attitude of selflessness and set a good example. Carlos remembers seeing his father apprehend someone running through the yard that was chased by law enforcement.

“My father was always a hero to me, from a very early age,” Carlos said. “I wanted to grow up to be just like that.”

Carlos served in both the Navy and Army.

“He encouraged all of us at the age of 18 to serve our country,” he said. “He was just proud to be an American, period.

“He was a bastard of two countries,” Carlos said. “He didn’t have a place, period. I’m pretty sure that put him in the grave a little bit earlier.”

Before Torres was deported a second time, Sam lived with his father from 13 until the time he enlisted in the Navy at 20.

“I felt a duty,” he said. “My dad always instilled that.”

He remembered his father giving him vocabulary words and said he owed his affection for reading to Torres. He reminisced about playing chess and getting advice from the man he called his best friend.

Sam called his time with him the “best thing that could have happened to me because I had the chance to build a relationship with my father.”

And he remembered how Torres tried to steer him away from the wrong crowds so he could help Sam not make the same mistakes he did.

“‘Look son, you’re headed down the wrong way,'” Sam said, recalling the advice of his father. “‘I know, because I’ve been there. I’ve done this.'”

Sam said his father never gave up hope that he’d return to the United States to be with his family — even up until the day he died.

“I think sometimes he waited for a paper to state that he was American, but inside he knew he was American,” said his 35-year-old son Robert Mosqueda. “That was his God-given right, not for someone to take and remove, but that’s the way it fell.”

“My father was All-American,” Carlos said.

This article was written by Daniel A Flores from The Associated Press and was legally licensed through the NewsCred publisher network. Please direct all licensing questions to legal@newscred.com.