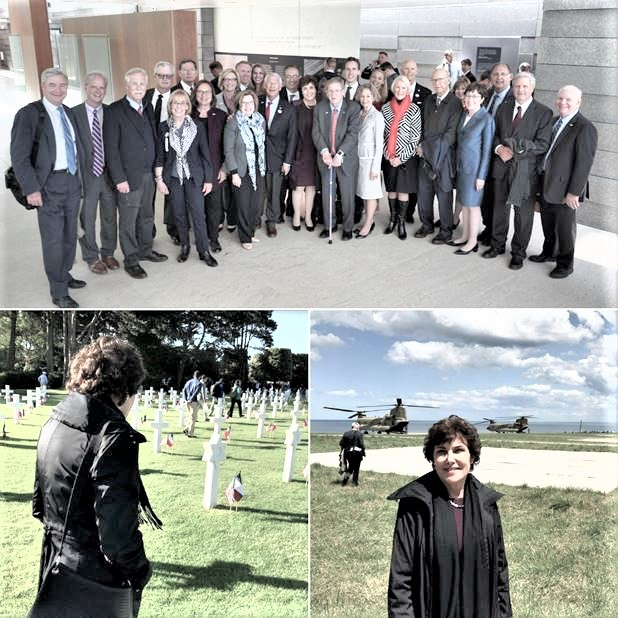 By: Ivana Brancaccio
COLLEVILLE-SUR-MER, FRANCE – On June 6th, 2019 U.S. Senator Jacky Rosen (D-NV) joined a bipartisan Congressional Delegation to Normandy, France for the 75th anniversary of the D-Day invasion by Allied forces during World War II. The Delegation participated in an official ceremony at the American Cemetery of Colleville-sur-Mer.

“It is a tremendous honor to join my colleagues and represent the United States and Nevada at today’s ceremony honoring the 75th Anniversary of D-Day, in Normandy France, on the very beach where the invasion took place,” said Senator Rosen. “Recently, I had the opportunity to meet with one of the heroes of that fateful day, Dr. Leedell Neyland, a World War II veteran who lives in Henderson. At the young age of 22, Dr. Neyland was stationed over 5,000 miles away from home, as a steward aboard a Navy ship off the coast of Normandy. His incredible story is one of bravery, patriotism, and courage. Meeting with Dr. Neyland, making this pilgrimage, and attending this memorial ceremony was a truly moving experience. Hearing Dr. Neyland’s story, and the stories of countless American heroes has only reaffirmed and strengthened my commitment to supporting our veterans in every way I can.”

The D-Day 75th anniversary ceremony was attended by more than 150 veterans, U.S. elected officials, U.S. service members, dignitaries from our allied partners in the French government, and other participants.