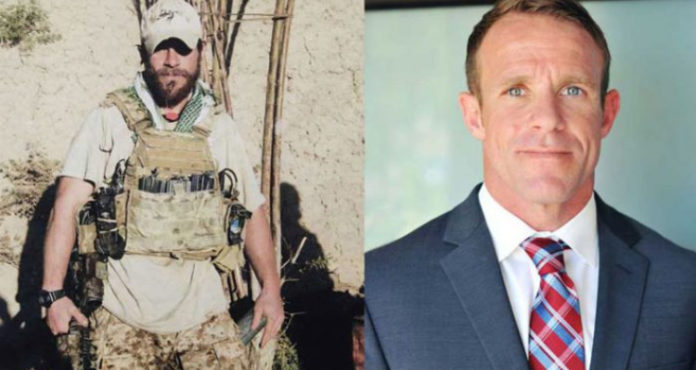 JULY 10, 2019 | MELISSA LEON
While Navy SEAL Chief Eddie Gallagher has been found not guilty of murder charges and was acquitted of all but one count against him, his defense team still has a journey ahead to ensure that justice is truly served.
Now, Gallagher’s head defense attorney, Tim Parlatore, is asking current and former members of the military for help.
Gallagher was recently acquitted of all murder, witness intimidation and assault charges against him. He was found guilty of one single count involving taking a photo with a terrorist’s corpse. As he builds his petition to the convening authority to disapprove the charge and sentence, Parlatore is asking for anyone who is willing to come forward and share about a photo incident like Gallagher’s that was resolved, so he has data he can present.
“What he was convicted of – the sole count of taking a photo with a corpse – is something that if that’s all he was charged with, it should have been a non-judicial punishment [NJP], not a court-martial,” Parlatore told American Military News on Wednesday. “The only reason there’s a general court-martial conviction of that count is because of the other charges.”
“If you were to give him a general court-martial conviction for that [the charge of taking a photo with a corpse], it’s disproportionate to what every other service member gets,” he noted.
“Because it’s not something anybody keeps statistics on, I’m trying to anecdotally gather other cases where this is resolved and say, look, here are 30 different cases where people who did the same or worse. Everything was handled with non-judicial punishment,” he explained.
“The best way for me to get that information – there’s no database, it’s not something I can look up, it’s not something the JAGs [Judge Advocate General Corps] have access to – the best way for me to do it is to crowd-source my legal research and put it out to the veteran community,” Parlatore pointed out.
Any instances that a service member or veteran comes forward to share a story with would be strictly confidential, and names would not be disclosed, Parlatore stressed.
“It’s going into a private letter, not a publicly filed document,” he said.
The ultimate goal is to have the convening authority disapprove Gallagher’s conviction on that count, he noted.
“My goal is I want Eddie Gallagher to retire with his pension, rank and without a criminal record,” Parlatore said.
After posting a call for help on the Free Eddie Gallagher Facebook page, Parlatore says he has already had responses.

“I’ve gotten a tremendous response so far from veterans and active duty service members with stories they want to tell so they can help Chief Gallagher,” he said.
Anyone with information they would like to share can contact Tim Parlatore by sending him a private message on Facebook or by emailing timothy.parlatore@parlatorelawgroup.com.

Farewell To Our 41st President, A Hero And A Navy Pilot...