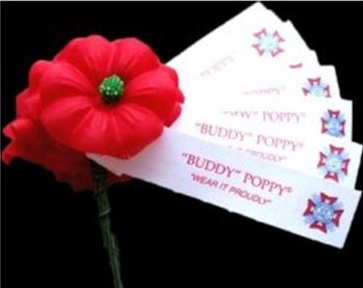 By: Lou Rothenstein
This old soldier first became aware of the “Buddy Poppy” at the end of WWII. My older sisters were distributing them for the VFW as several of our relatives were members and still serving. Through the years this practice has carried on each Memorial and Veterans Day by many veterans and their organizations. Occasionally, a lady will come up to Buddy Poppy Volunteers and state how she passed them out to people as a little girl.
At the last VFW Post 3848 Veterans Day Henderson Car Show – a fund raiser for the Southern Nevada Veterans Home, post members were distributing the Buddy Poppy. A young lady approached wearing the Royal Canadian Legion Poppy that throughout the British Commonwealth nations and France is called the “Flower of Remembrance.” It commemorates the WWI Armistice, November 11th, 1918. The meaning of the Red Poppy is taught in their schools to insure that the sacrifices of those who served would never be forgotten. So around early November, wherever they are in the world, the Canadian wears their Remembrance Poppy. One cannot find many people in this country – students or teachers included, that know much about world-changing events in history such as the Great War. To be continued next issue.