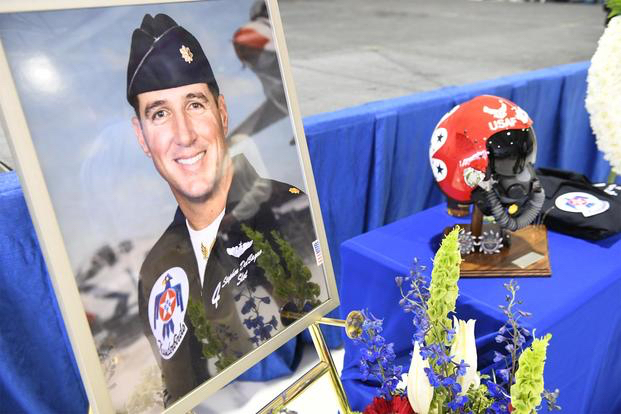 A U.S. Air Force Thunderbirds pilot crashed his F-16 Fighting Falcon in April after experiencing a gravity-induced loss of consciousness (G-LOC) during an aerial maneuver over the Nevada Test and Training Range, according to a new investigation report.

Maj. Stephen “Cajun” Del Bagno was performing a routine “Split-S” demonstration when he became fully incapacitated at the end of that five-second maneuver, leading to the crash, states the Air Force Investigation Board report, released Tuesday.

Del Bagno did not attempt an ejection, the report said. He was killed on impact.

“During the ‘High Bomb Burst Rejoin,’ an aerial maneuver near the scheduled end of the aerial demonstration training flight, the [mishap pilot] flew the [mishap aircraft] for approximately 22 seconds in inverted flight between 5,500 and 5,700 feet above ground level,” the report states.

During that time, Del Bagno experienced G-Forces at levels between -.5 to -2.06. At -2.06 Gs in inverted flight, he “initiated a descending half-loop maneuver,” known as the Split-S, it said.

“After five seconds in the Split-S, the [mishap pilot] attained a maximum +8.56 Gs,” which caused him to experience G-induced loss of consciousness, the report continued.

The aircraft crashed April 4 at approximately 10:30 a.m. local time, roughly 20 minutes after Del Bagno took off from Nellis Air Force Base, where the Thunderbirds are stationed.

The report, authored by Brig. Gen. Case A. Cunningham, said that, based on witness testimony and the heads-up display audio recordings, Del Bagno “did not announce problems” with his Advanced Technology Anti-G Suit, which was worn by the demo team, as well as other pilots, for high-velocity operations. Nor did he report an intolerance for +Gs prior to the mishap.

Normally, a pilot begins Anti-G Straining Maneuvers, or forcefully “exhaling against a closed glottis (back of the throat) while simultaneously tensing leg, arm, and abdominal muscles” as well as the muscles of the buttocks, to increase blood pressure and flow to prevent G-LOC.

Furthermore, a pilot would be subjected to the “Push-Pull Effect,” which results from a relaxed “subject’s exposure to -Gs, the ‘push,’ prior to the onset of +Gs, the ‘pull,’ ” the service said.

“Under -G conditions, the subject experiences a decrease in blood pressure, widening of the blood vessels, and a lowered heart rate. These three factors reduce the subject’s resting +G tolerance in an amount directly related to the magnitude and duration of the preceding -Gs,” the report said.

During that five-second maneuver, Del Bagno experienced a max of +8.56 Gs, resulting in G-LOC “due to reduced blood flow to the brain,” the report said.

Cunningham said the Push-Pull Effect greatly contributed to the accident.

“I find by a preponderance of evidence two factors substantially contributed to the mishap: (a) the MP’s diminished tolerance to +Gs induced by the physiology of exposure to -G’s (“Push-Pull Effect”) and (b) an associated decrease in the effectiveness of the MP’s Anti-G Straining Maneuver (AGSM) under those conditions,” he said.

Del Bagno was the slot pilot flying the No. 4 jet for the Thunderbirds.

Before joining the team, he was an F-35A Joint Strike Fighter evaluator pilot and chief of standardization and evaluation with the 58th Fighter Squadron at Eglin Air Force Base, Florida.

The Valencia, California, native had more than 3,500 flying hours in over 30 different aircraft, with 1,400 hours as an Air Force pilot, his official biography said.

Del Bagno commissioned out of Officer Training School at Maxwell Air Force Base, Alabama, in 2007. He was in his first season with the demonstration team.

The Thunderbirds canceled multiple appearances following the crash. They resumed traveling in May.