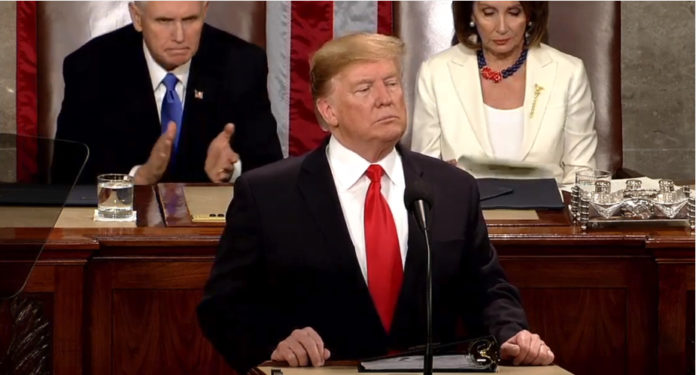 President Trump has confirmed the date of his second summit with North Korean leader Kim Jong Un.
The second U.S.-North Korea summit will take place over two days during Feb. 27-28 in Vietnam, Trump said in his State of the Union address Tuesday night.
“As part of a bold new diplomacy, we continue our historic push for peace on the Korean Peninsula,” Trump said. “Chairman Kim and I will meet again on February 27th and 28th in Vietnam.”
“Our hostages have come home, nuclear testing has stopped, and there has not been a missile launch in more than 15 months,” Trump said of the progress made between the two nations.
“If I had not been elected president of the United States, we would right now – in my opinion – be in a major war with North Korea,” he declared.
“Much work remains to be done, but my relationship with Kim Jong Un is a good one,” he added.
Last month, Trump hinted at the date of the summit while touting progress made in denuclearization talks with North Korea.
“The Media is not giving us credit for the tremendous progress we have made with North Korea. Think of where we were at the end of the Obama Administration compared to now. Great meeting this week with top Reps. Looking forward to meeting with Chairman Kim at end of February!” Trump tweeted on Jan. 30.
Talks of a second summit between the two leaders have been bubbling for several months.
In November, Trump said the summit would take place “early next year.” Previously, he said the summit would be held after the November mid-term elections due to his rigorous travel schedule as he campaigned for candidates.

In October, Secretary of State Mike Pompeo met with Kim to begin planning the details for the second summit.
At the time, Trump had noted that the next summit with Kim would be in “probably a different location” than Singapore, where their June 2018 summit took place. It was there that the two leaders reached an agreement involving North Korea’s “complete and verifiable” denuclearization, along with repatriation of U.S. service members’ remains from the Korean War.
North Korea has maintained that the U.S. should be more lenient with economic sanctions and provide concessions in order for denuclearization talks to make further progress. The U.S. has refused, sending the talks to a standstill.