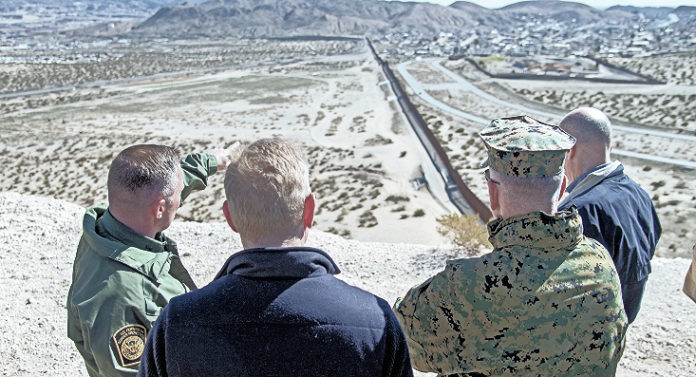 A U.S. Marine assigned to the southern U.S. border fired his service weapon on duty after he was reportedly attacked.
The Marine, who was not named, alleged he was attacked by three individuals while he was inside his vehicle early Wednesday morning last week, officials told the Associated Press on Friday.
An investigation is underway, spokesman for U.S. Northern Command John Cornelio told the Associated Press. Cornelio confirmed that the Marine fired his weapon, and there were no injuries in the incident, but no other details could be provided during the active investigation.
The incident took place at a mobile surveillance camera site located near El Centro, California, about 10 miles from the U.S.-Mexico border.
Approximately 2,100 active duty service members are deployed to the southern border mission. One such task they’re assigned to is helping border agents with vehicle-mounted surveillance cameras.
Just days after the attack, a U.S. service member reportedly died in southern Arizona while deployed on the border support mission.
Peterson Air Force Base officials confirmed to the Associated Press that the anonymous service member was found Saturday near Nogales.
The details of that incident have not been released either, but foul play was not suspected.
Neither incident was the first serious incident involving service members on the southern border.
In April, two U.S. Army soldiers assigned to the border mission were ordered out of their vehicle, disarmed, detained and questioned by several Mexican troops who crossed the U.S. border.

The U.S. Army soldiers didn’t have enough time to request emergency assistance before they were quickly approached by the Mexican troops wielding FX-05 Xiuhcoatl military rifles, Newsweek reported at the time.
They were instructed to stand at the front of the vehicle where they were searched and disarmed. One of the Mexican soldiers removed the Army sergeant’s Beretta M9 service pistol and placed it inside the vehicle.
Officials had said the sergeant permitted the Mexican soldier to disarm them “in an attempt to de-escalate a potential volatile situation.”
The incident later prompted a review of protocol.
“There continues to be record numbers of families and children arriving predominantly from the Northern triangle countries of Guatemala, Honduras and El Salvador, with over 58,000 family members apprehended on the southern border in April,” a Department of Homeland Security official told CNN last month.
The excessive number of migrants entering the country has caused “dire concerns” due to the lack of detention space, forcing migrants to be held in temporary facilities for long periods of time.
“This is dangerously elevating the time in custody and poses serious, significant safety risks,” the official said.

“Getting to Know the SBA”