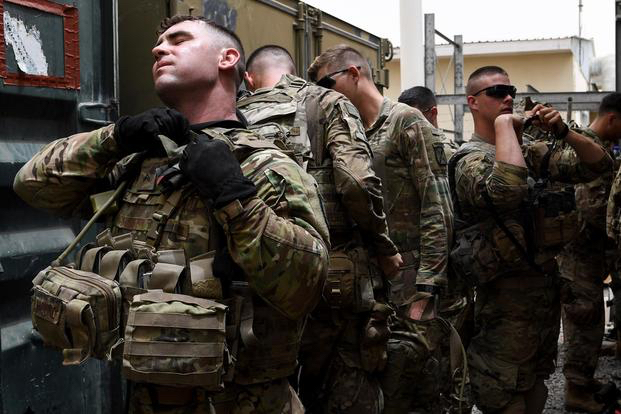 22 Feb 2019 | Military.com | By Matthew Cox
U.S. Army equipment experts plan to test lighter-weight, individual body armor plates by this summer, according to a recently released Defense Department test and evaluation report.
The Army’s multi-component Soldier Protection System body armor features hard-armor plates designed to stop rifle rounds. They’re known as the Vital Torso Protection component of the system.
Commanders can choose from the Enhanced Small Arms Protective Insert, or ESAPI, or the X Threat Small Arms Protective Insert, known as XSAPI, in addition to corresponding side armor plates of the same protection level. The XSAPI armor, which weighs slightly more, is for higher threats. All plates fit into the new Modular Scalable Vest, or MSV.
The Army has started fielding the MSV, which weighs about five pounds lighter than the older, Improved Outer Tactical Vest.
The Army intends to test new, lighter-weight armor plates in third quarter of fiscal 2019, according to the Fiscal 2018 Annual Report from the Defense Department’s Director, Operational Test and Evaluation.
The report offers very little detail about the plates the service intends to test, but Brig. Gen. Anthony Potts, who commands Program Executive Office Soldier, talked about ways the Army is trying to lighten plates in October at the Association of the United States Army’s annual meeting.
The Army has been working with industry to reduce the weight of body armor plates by as much as 30 percent, Potts said.
One way to do this is by adjusting the standard of allowable back-face deformation, or how much of the back face of the armor plate is allowed to move in against the body after a bullet strike.
The Army is changing the allowance to 58mm standard instead of the conservative 44mm standard it has used for years, Potts said, who added that there is “no significant” risk to soldiers.
The change allows companies to adjust the manufacturing process, which could lead to a lighter plate, he said.
— Matthew Cox can be reached at matthew.cox@military.com.